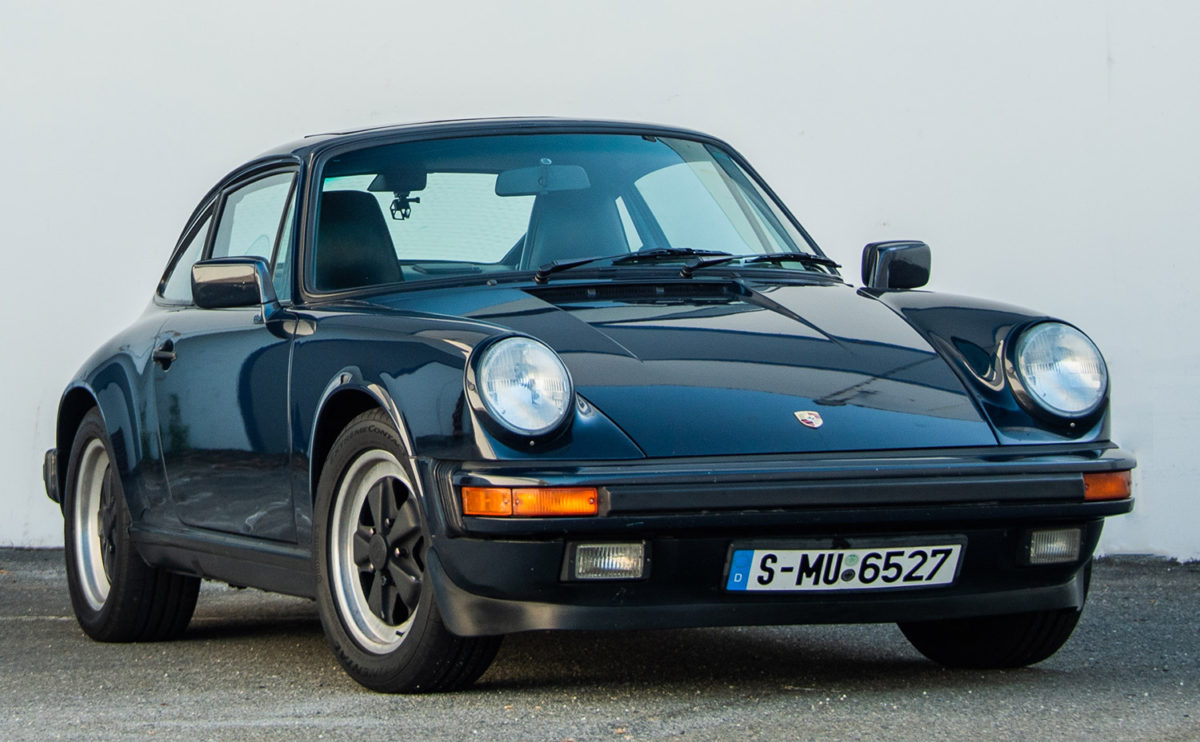 Enhancing the Legend with Hybrid Quickness

Perhaps the most iconic of driver’s cars, this air-cooled 911 is being transformed with Shadow Drive. We’ll keep the heart, soul, and driver engagement you love. Acceleration will be something entirely new….

It’s been said the Porsche 911 divided the world into two groups; those that know how to drive and everyone else.

One of the most engaging driver’s cars ever, the air-cooled 911 occupies a special place. Fully analog with feedback through the steering, seat and pedals that makes you feel the road. You don’t drive this car, you wear it. The sound of the flat six revving, the unique smell of the interior, these cars are special. 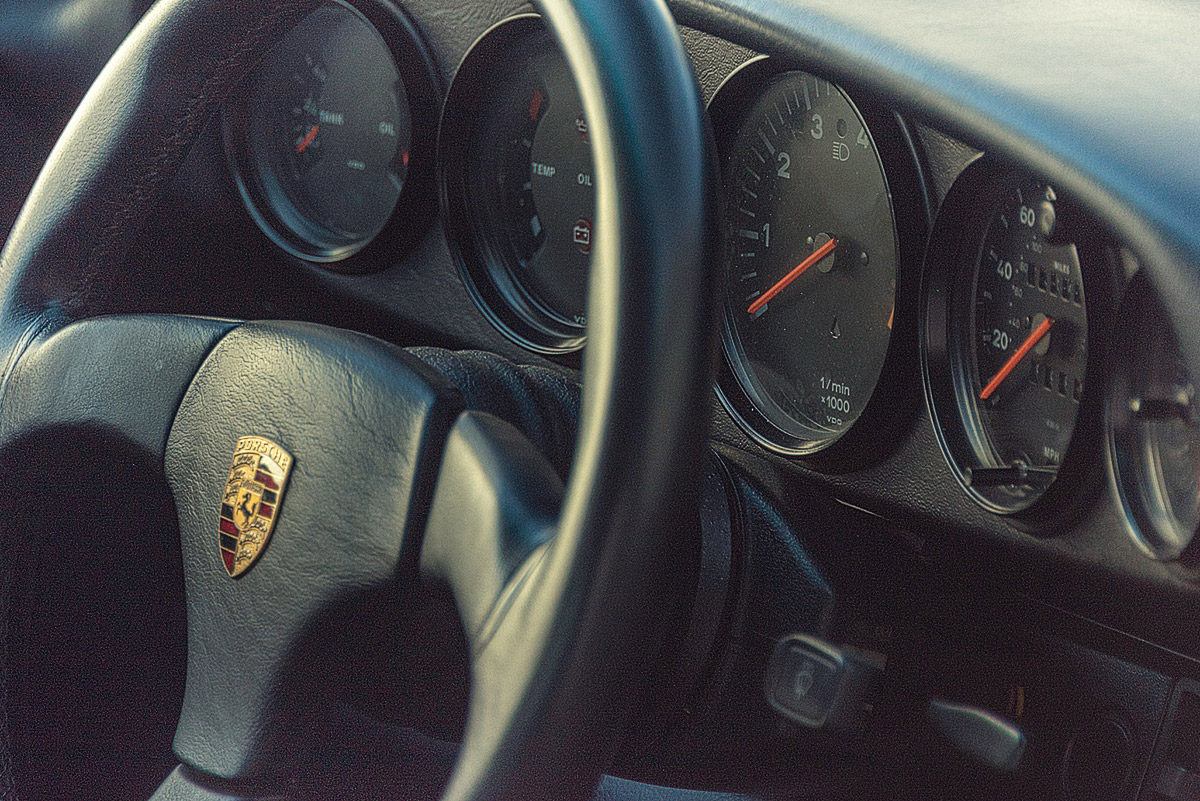 The air-cooled 911 remains an incredibly popular car. While the engaging driver experience stands the test of time… acceleration has not. Modern technology has rendered the venerable 911 disappointingly slow by today’s standards.

Rebirth this air-cooled 911 with acceleration that rivals modern performance cars. Keep all the character, and the engaging driver experience.

Remember these cars are special, don’t ruin it. No temperamental race engine, please, make it easy to live with as a daily driver. And if you can improve fuel economy at the same time that would be great, thanks.

Shadow Drive provides the unique opportunity to preserve and maintain the classic 911’s character and durability on the road while boosting performance to modern levels. This 1988 911 rolled out of the showroom with 215hp. Shadow Drive’s added 150hp will bring the peak to 365hp with a fat torque curve that starts at idle and immediate throttle response. With a projected weight of 2900 lbs, performance will be impressive.

All this while keep the engine bone stock, reliable, with everyday usable drivability, and no impact to smog. Shadow Drive is a hybrid overlay to the existing engine, requiring no engine modifications and seamlessly integrating into the driving dynamics of the car’s existing character.

Hybrid Performance, with a Clutch

There will be important differences from the late model water cooled Shadow Drive systems.

For starters, unlike our PDK builds, this G-Body features the ubiquitous and robust G50 manual transmission, found across a number of Porsche models. 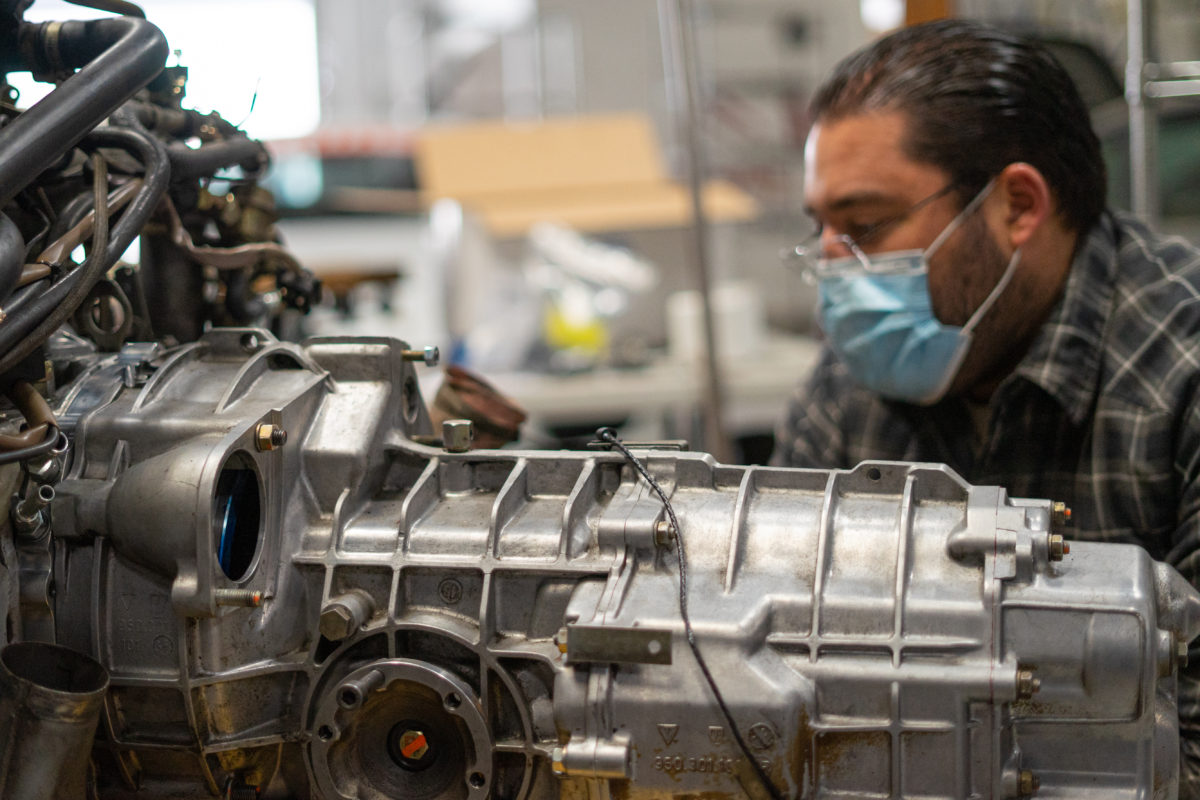 Shadow Drive for late model cars monitors the engine and driver inputs over the CAN bus. This 1988 car has no CAN bus. This requires that we provision sensors needed to monitor throttle position, brake pressure, and host of other variables needed for Shadow Drive to do its shadowing. Shadow Drive needs to see what the car is doing in real-time so that it can apportion power assist and regeneration at the appropriate times and in the appropriate measures. 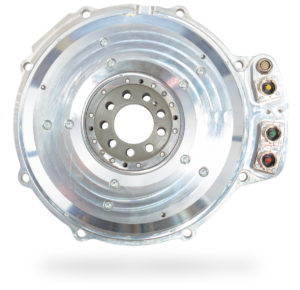 Integrated between engine and transmission, the motor layout for this air cooled car is consistent with the Shadow Drive systems for water-cooled 911s. However the details are all different including bell housing diameter, bolt pattern, original starter motor location and more. Hence we developed a completely new custom motor designed specifically for air-cooled fitment.

Positioned between the gearbox and the engine, the motor replaces the flywheel – think motorized flywheel. The motor rotor is bolted directly to the crankshaft and provides rotational inertia.

With the motor bolted directly to the crankshaft, electric power is added to the engine output seamlessly. Positioning the motor before the transmission is optimal for enhancing acceleration by taking full advantage of gear multiplication in the gearbox. The same percentage performance increase is realized in every gear. This provides the familiar engine/transmission driving experience we love – except it is enhanced with more torque.

The motor weighs in at about 35 lbs. This is fully offset by items removed. Absent are the original flywheel, starter ring gear, and factory starter motor (very heavy in these aircooled cars). Conveniently this removed weight comes from the same location the motor is inserted – minimizing impact on weight bias. The Shadow Drive motor takes over engine starting duties.

Testing out at 150 horsepower and 150/lb ft of torque, the motor will be a potent addition to the engine output. In the case of this 1988 911, that means going from 214 HP stock to 364 HP. The torque jump is just as impressive, going from 195 ft/lbs to 345 ft/lbs. On a car that weighs approximately 2,700 pounds, with Shadow Drive only marginally impacting that number, the added performance will be dramatic. 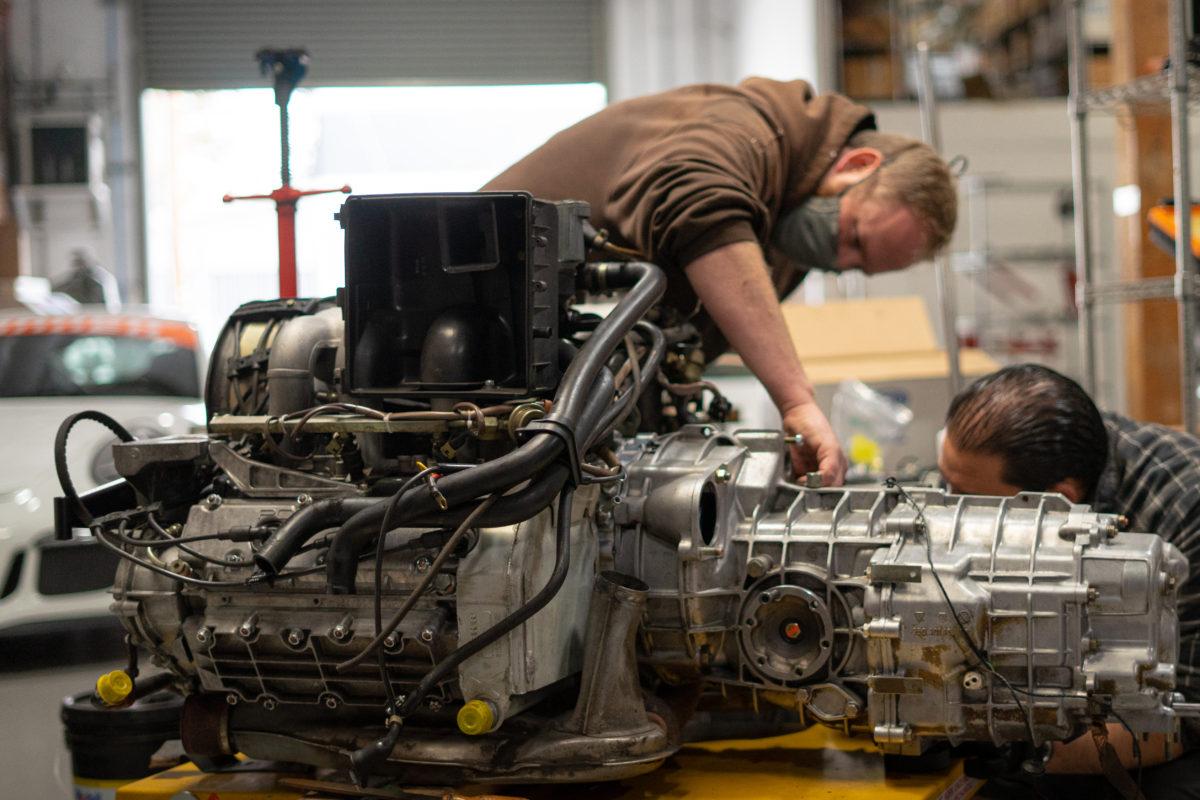 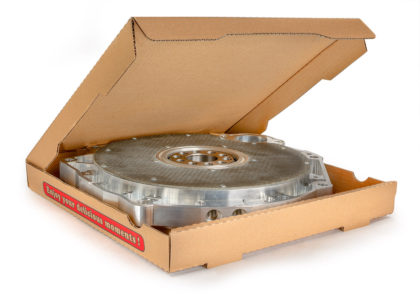 The motor is an axial flux design. Unlike the watermelon-proportions of radial flux motors typically used in industrial motors and EVs, axial flux motors have a form factor that is large in diameter and short in length, more akin to a deep-dish pizza. They provide a greater torque-to-length ratio than radial flux designs and conveniently fit the general shape of a flywheel.

The motor shape packages well since the original 911 design didn’t leave space to add a watermelon in the driveline. Consistent with our “don’t ruin it” mandate, cutting up the chassis wasn’t an option. Our custom design fits neatly in place of the flywheel inside the bellhousing, or in a pizza box. 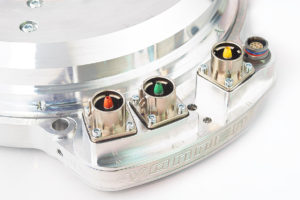 Actually it’s both. Shadow Drive is a 3 phase AC motor which can operate efficiently as a generator too.

Generator mode is used to recharge the Shadow Drive battery, and can charge off the engine anytime it is running. Generator mode can also provide counter-torque through the drivetrain (similar to engine braking) and thereby provide regenerative braking ability to recapture energy into the battery that would otherwise be lost to heat in the brakes.

The “don’t ruin it” ethos applies to appearance of the mechanicals just as much as the driving experience. The motor is visually discreet and not easy to spot even with the car on a lift. It can be seen as a 22mm sliver between and can transmission cases, and for most it will need to be pointed out. 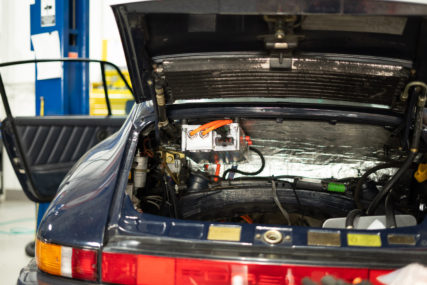 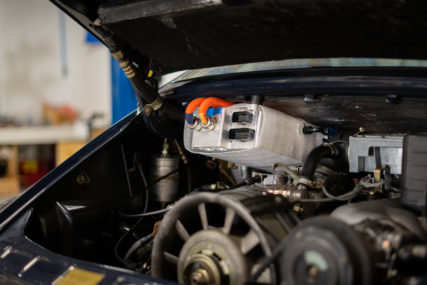 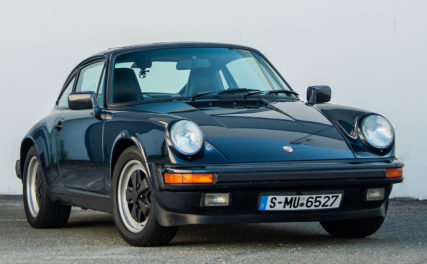 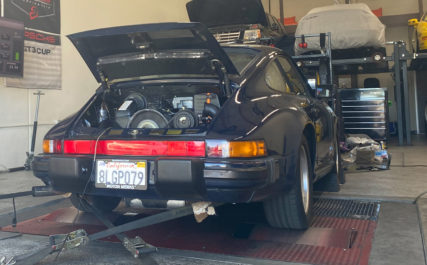